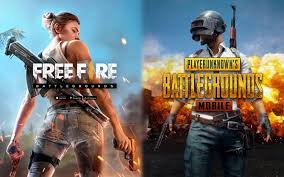 The online world has exploded into battle royale madness, with the launch of a couple of huge games. One is Free fire and the other is PlayerUnknown’s Battlegrounds or PUBG.

The important thing about these huge titles is that they are now both mobile games – hence PUBG Mobile – as well as being available across other platforms.

There is no denying the fact that PUBG Mobile is one of the most popular games ever made.

In just one year, it has garnered a cult following.

Garena Free Fire, on the other hand, is a Battle Royale that introduced a lot of Indian gamers to the genre, and subsequently to PUBG.

One key factor that keeps this game standing on the top for so long is that this game offers both the PC version and the mobile version separately. Each version of this battle royale title is so famous and successful that there are numerous esports tournaments for each version of the game.

We compare the two to help you choose the better game.

Yes I have played both of these games and was always looking for this type of mobile gaming experience I will share my take on these trending games, also give some reviews and also I will provide what improvements are needed for these games, you can also share your feedback at the end of this article.

So let’s begin no doubt both games are famous and growing fast Pubg has a larger audience compared to free fire that means more players then the other game also it requires more patience more game time to be a winner.

Pubg has more vehicles compared to free fire but one thing to agree on free fire is having a better and smoother gameplay, Pubg has 25 weapons and free fire has 18.

Like every other battle royale game these two differ in their way and that makes them unique.here are more comparisons and they are based on my experience.

In free fire, the gameplay is awesome from the lobby to the ingame experience but guns are not that good as it comes to aiming and fire ranges. Guns are more like a cartoonist version and cant aim from long ranges.